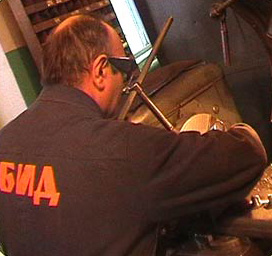 BID was founded in 1994.
The main activity is the development and production of equipment for the food industry:

Since 1998, BID has specialized in the production of pasta equipment. In 2009 our company was 15 years. The pattern of ownership is private capital with obtaining own funds of production. “BID” company is continuer of any other enterprises in the past, though all leading specialists of the company are professionals with great experience in food industry.
During our activity we were engaged in such spheres:
bakery, sausages and smoking shed, flour-and-cereals workshop, pasta presses and drying chambers, dies.
Flour-and-cereals workshop brought first success to the company. Till 1997-98 it was manufacture which brought primary income. Later pasta equipment manufacture takes the first place. Then these units come and go consecutively: single-bunker press on 70kg/hr, two-bunker press on 100 kg/hr, semi-automatic single bunker with dough vacuuming on 100kg/hr, single-bunker automatic machine with dough vacuuming on 100kg/hr, 200 kg/hr, 300 kg/hr and 600 kg/hr.
Since 2000 the company has been producing pasta drying chambers, made in vacuum environment.
Having partnership with representatives of Euromatrici company (Italy), in 2000 “BID” company enters Russian, Belarusian, Moldavian, Estonian markets due to pasta aggregate with automatic water and flour loading at the capacity of 100 kg/hr for vacuum products. A unique design of water and flour batcher allowed us to eliminate barriers which appeared above the power for our nearest competitors.
At the beginning of 2009 there were released 10000 vacuum pasta aggregates which are successfully operated in Ukraine, Russia, Moldova, Kazakhstan, Azerbaijan, Armenia, Georgia, Mongolia, Belorussia, Estonia, Tajikistan, Uzbekistan, Germany, Australia, Kenya.
Legitimation of the company is certificated by Kiev Metrology and Standardization Center and also Ministry of Health.